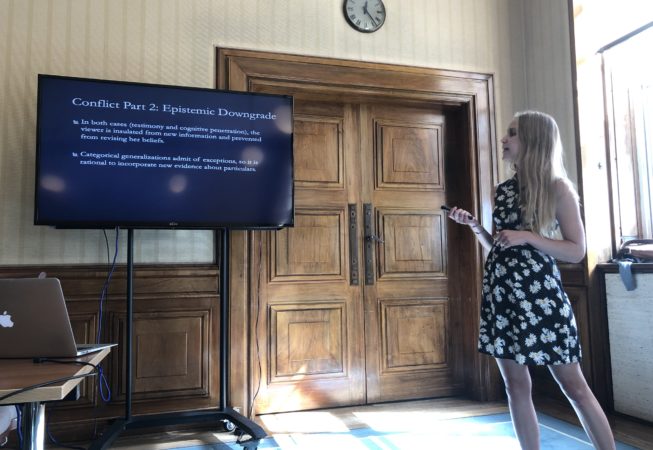 Although the study of pictorial representation has connections with various areas of philosophy, for the most part, it has been developed mainly within the area of aesthetics and the philosophy of art. The idea of this 2-day conference was to bring philosophers working on different sub-areas of the discipline to reflect on pictorial experience or depiction from the point of view of epistemology, philosophy of mind and perception and their intersections with aesthetics. There were a total of six speakers:

The topics discussed touched on fundamentally these lines of discussion

Is there a common nature of the objects of pictorial and perceptual experience?

Apart from objects, what other things can figure in the content of pictorial experiences and what role does the picture vehicle play in constraining this content? What sorts of temporal features are part of the contents of our experiences of pictures? While it seems that temporal content is necessarily part of perceptual experience, the corresponding claim for pictures is not obvious. If a picture represents its object as bearing certain properties, must it also represent something about the time at which it bears them (at once, at different times, and so on), or can a picture lack temporal content altogether? These issues were taken up from various angles by Rob Hopkins and Alex Grzankowski.

Aesthetic and Epistemic interactions in our experience of pictures and picture appreciation.

Some philosophers have argued that moral defects can be aesthetic virtues in our experience of works of art in general, and pictures in particular. It is rarely argued, however, that an epistemic defect can be an aesthetic advantage; but is this a possibility? A case to consider are instances of pictorial works of art where conditions of exhibition require using light or different technologies that transform the real look of the picture or create a sort or illusory experience in order to improve or restore its original aesthetic appeal. Zoe Jenkin discussed these issues in her presentation.

Art historians and philosophers often write as though there are technological advances in pictorial representation. But what developments could these be? Are they developments in picture-making or in picture-viewing? Can these two kinds can be meaningfully distinguished? If there were such things as pictorial technologies, and we somehow got our hands on a picture made far in the future that benefited from several such technologies, would we be able to see in this picture what it really depicts? Antonia Peacocke developed these questions and others in her talk.

There are properties of the contents of visual experiences that are shared with pictorial contents and it is tempting to think that there might be a common explanation. In work on the format of mental representation it is sometimes suggested that whereas beliefs are sentence-like, perceptual states trade in picture-like representations and hence inherit the expressive limitations of pictures. If this is correct, why do pictures have these limitations? On the other hand, if depiction is mediated by visual resemblance might the explanation not go the other direction – pictures being limited by the way things can look? These were the sort of questions Alex Grzankowski discussed in his talk.

This event featured speakers from all professional levels. Two of our speakers were early career researchers and our event provided many opportunities for London graduate students to interact with our visitors. 50% of the speakers at this event were women.