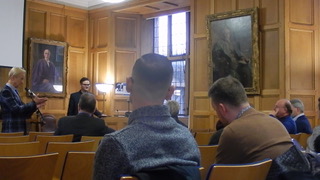 Although the first application for this conference was for a major grant (i.e., up to £14,000) from the BSA, the much smaller amount (£4,370) was very gratefully received. Indeed, that amount proved more than ample for having a small but concentrated conference. There were numerous compliments regarding the quality of the conference, including from people one might not have expected. One attendee—from Duke University—said: “This was a superb conference! All of the papers were uniformly excellent. It’s exactly the kind of thing we would love to have at Duke.” There was no doubt that each paper added much to the overall discussion of the conference topic.

Garry Hagberg: Garry is a professional improviser and also well known for his writing on improvisation. He is Professor of Philosophy at Bard College. Since he has written in areas that connect improvisation and ethics, he was a natural fit for the conference topic. Since members of the BSA will no doubt be familiar with his work, one need say no more.

Suzanne Ravn: Suzanne added a number of excellent dimensions to the conference. Her appointment at the University of Southern Denmark is in the Department of Sports Science and Clinical Biomechanics. She is Associate Professor and head of the unit “Movement, Culture, and Society.” So she is not ‘officially’ a philosopher, even though she is very philosophically astute. She also works in dance rather than music. A number of the musicians in the audience were quite taken by her phenomenology of dance in which she spoke of the kind of empathy necessary for dancing with a partner. A further way in which her paper rounded out the conference is that she focused particularly on the tensions involved in group improvisation.

Bruce Ellis Benson: Having come up with the idea and term ‘improvisational virtue’, Benson provided the first talk, which laid the groundwork for the kinds of questions and concerns that the topic raises. Hagberg mentioned that his book The Improvisation of Musical Dialogue (Cambridge) was key in terms of putting the topic of improvisation on the philosophical ‘map’. While that work has a concluding chapter on the ethics of improvisation, Benson’s focus in recent years has turned to improvisation that manifests itself in many aspects of human existence, including his work as Senior Research Fellow at St Andrews on apology and forgiveness.

Those were the people in the conference working on issues in improvisation. The three other main speakers were scholars who have never worked on improvisation:

Nancy Snow: Nancy is the Director of the Institute for Human Flourishing at the University of Oklahoma and the editor of The Oxford Handbook of Virtue. As she readily admitted when first asked her to be part of the conference, she had never written anything on improvisation and was not fully informed as to how it all worked. However, provided with a bibliography of some key texts, she came back with a very astute analysis of creativity (that built off of the work of Berys Gaut) and how the virtue of humility helps facilitate greater creativity and being creative with others.

Glen Pettigrove: Glen is Professor of Moral Philosophy at Glasgow University. He is perhaps best known for his book Forgiveness and Love (Oxford). But he was keen to work on the topic of improvisation. Like Snow, Pettigrove focused on creativity but through the lens of the issue of autonomy.

Kevin Scharp: Kevin is Reader in Philosophy and head of Arché at St Andrews. His work focuses particularly on ‘conceptual engineering’, a relatively new but burgeoning area of philosophy. He had been asked to bring his skills as conceptual engineer to the topic of improvisation. How do we think of improvisation and how should we think about it. His talk was the last one of the conference and was designed to open up questions for developing the area of improvisational virtue. It was very effective in stimulating conversation at the concluding roundtable.

In line with the BPA/SWIP guidelines, two of the five speakers at the conference were female and three were male. Moderating the sessions were three men and two women. The speakers and moderators were from different disciplines—philosophy, religion, and sports/movement. Although no participants chose to utilize the day care facility regularly used by the university, it was available.