BSA Connections Conference: Creativity Across the Arts and Sciences 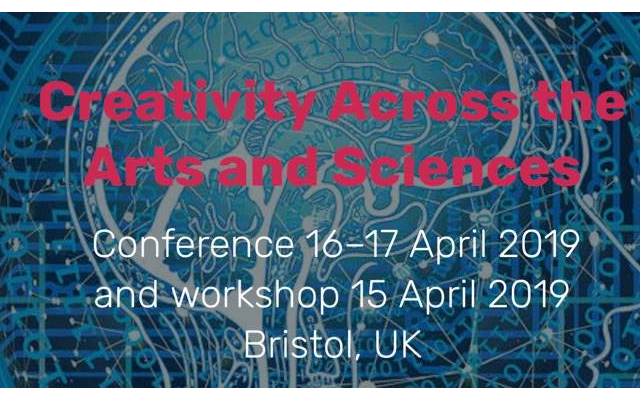 The conference was organised by Anthony Everett (Bristol), Joanna Burch-Brown (Bristol), and Alexander Bird (King’s College London), with administrative support from Elle Chilton-Knight (Bristol). The conference took place in Cotham House, Bristol, the home of the University of Bristol Department of Philosophy, and was preceded by a workshop on 15 April for early career researchers.

Pre-conference workshop
This allowed ECRs to present their work in association with the conference, which in turn will have enabled some to obtain funding to attend the workshop and conference. The workshop was cost-neutral (lunch, tea, coffee were covered by the workshop registration fee).
The advertised workshop speakers were:
• Claire Anscomb (Kent) “Creative Agency and Co-Working in Art and Science”
• Lucy Barry (Warwick) “The Potential for Radical Novelty in Human Creation”
• Caterina Moruzzi (Nottingham) “Generative Adversarial Networks as a Creative Model of Music Composition”
• Julia Sánchez Dorado (UCL) “The Creative Similarity Account of Representation”
• Sylvia Solakidi (Surrey) “Performance Philosophy Approach to ontological Aspects of Creativity”
• Jens Ziska (Warburg Institute) “Artificial Creativity and Adversarial Networks”
(Jeremy Page, Uppsala, had to withdraw a few days before the workshop).

Conference
The speakers and papers delivered at the conference (over two days) were as follows
• Hanne Andersen (University of Copenhagen) ”Creativity and Innovation in Contemporary Science”
• Angela Breitenbach (University of Cambridge) “Imagination in Aesthetic Experience and Scientific Understanding”
• Noel Carroll (The Graduate Center CUNY) ”Avant-Garde Art and the Creative Process: A Gricean Account”
• Alison Hills (University of Oxford) ”Against Romanticism. On the Value and Disvalue of Creative Imagination in the Arts and Sciences”
• Paul Hoyningen-Huene (Leibniz Universität Hannover) ”Marcel Duchamp, Creativity, and the ‘Fountain’”
• Matthew Kieran (University of Leeds) “Creativity, Procrastination and Courage”
• Maria Kronfeldner (Central European University) ”On Academic Freedom as a Prerequisite for Scientific Creativity”
• Elisabeth Schellekens (Uppsala University) ”Being Creative and Being Reflective: Making Contemporary Art”
• Dustin Stokes (University of Utah) ”Expertise, Skill, and Creativity”
• Michael Stuart (Université de Genève) ”What Can the Study of Imagination Tell Us About Creativity?”
• Paul Thagard (University of Waterloo) ”Procedural Creativity in Art and Science”
(Margaret Boden had agreed to speak but had to withdraw for health reasons. We invited Michael Stuart in her place.)

There were 39 participants at the conference.

Gender inclusiveness
62% of participants were women. 5 out of 6 workshop speakers were women. 5 out of 11 conference speakers were women (this would have been 6 out of 11 had Margaret Boden been able to speak). We did offer financial and other assistance with childcare. This was not taken up, except that in the case of one student the costs of childcare (at home) were taken into consideration in the bursary given. We ensured that the BPA/SWiP good practice guidelines were followed in the planning of the conference and in the management of the talks.