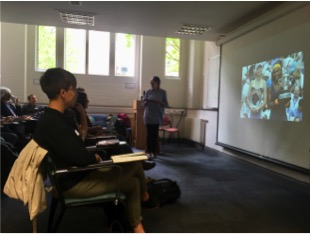 We invited three keynote speakers, Professor Amy Kind, Dr Adriana Clavel Vazquez and Professor Aaron Meskin, who all gave highly engaging talks on the skill of the imagination, imagination and racialized bodies, and imagination and food. Two of our keynotes spoke on the first day and one took the final slot, with postgraduates and early career presentations in between. Our keynotes had a 1.5 hour slot—leaving time for at least 30 minutes question time and a short break in between presentation and questions. This worked really well, with the talks tending to leave 45 minutes for questions. This allowed for in depth discussion and we for most of the audience’s questions to be answered.

We also sent out a call for abstracts to PhD and early career researchers, to get 8 additional speakers. We received about 30 abstracts which were anonymised for blind review, of which we selected 8. We were extremely pleased with the volume of abstracts we received and the attractiveness of the conference. This also showed that the way in which we advertised our conference—on twitter, philosophy mailing lists, through WRoCAH, and on facebook pages was successful and reached a wide range of people working in various topics on the imagination and from various institutions around the world. The abstracts were of very high quality. Our aim was to get a wide variety of topics tackled, but all crucially connected to learning from imagination. We wanted to strike a balance between variety of topics but also not too disparate. And this was a key aspect of our selection criteria when reviewing the abstracts. This was achieved and we found there were overlapping themes to all the presentations which allowed for very productive conversations and discussions that spilled over to break times and the conference dinner. Topics covered were imagination and morality, empathy and imagination, the role of imagination in creativity, the nature of the imagination, constraints on the imagination, fictionalism and imaginative resistance.

We were very pleased with all of the talks and the discussions that ensued. We had fantastic feedback from all of our speakers and many of the conference delegates who found the conference extremely fruitful and interesting. We were particularly proud of the feedback regarding the atmosphere of the conference; many commented on its friendliness and non-combative attitude during the question time. This allowed for a very productive couple of days, and the postgraduates/early careers felt confident in presenting their work and comments and questions were helpful. Further, we were informed that the advertising of the conference and the correspondence between us and speakers/delegates was really well done and everyone felt well-informed and prepared for the 2 days. It was exciting to be a part of a conference on a topic that is central to many areas of philosophy but which is still relatively new.

All other aspects of the conference ran smoothly and we didn’t have any logistical difficulties. We had attendees from Leeds, York, Sheffield, St. Andrews, Edinburgh, Bristol, Berlin, Leuven as well as US universities and had a mix of early career researchers and more established philosophers in attendance. We chose a restaurant that worked well for large groups and this meant that any delegates who wanted to join us for dinner could come along. We believe the event had a large impact on researchers interested or working on imagination from the perspective of philosophy of mind, philosophy of art, moral philosophy, philosophy of social change, and philosophy of science. It served as a good way to encourage future collaborations. We also managed to bring together PhD researchers with prominent academics in philosophy, which not only impacts the quality of research but also the opportunity of networking.