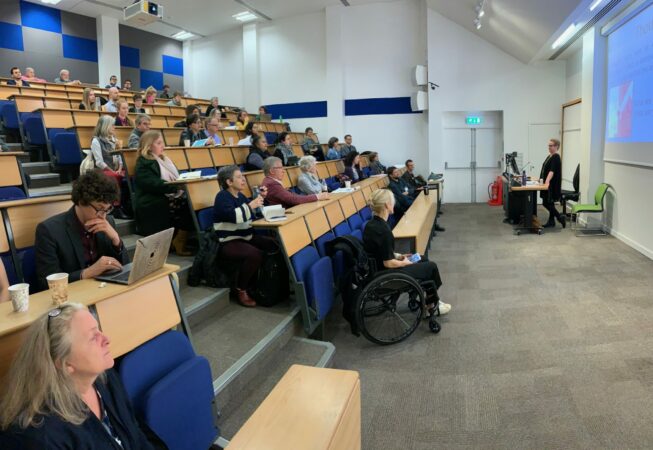 Sponsored by the British Society of Aesthetics and hosted by the Aesthetics Research Centre, the conference stimulated conversations about the connections art and aesthetics have with medicine, medical education, healthcare and the advancement of health and wellbeing. We welcomed some 90 delegates to Canterbury, of whom around 40 presented a talk, delivered a workshop or exhibited an artwork. The event attracted an exciting mix of philosophers specializing in aesthetics, scholars from cognate disciplines (like English) with expertise in the medical and health humanities, health professionals (medical doctors and nurses), and arts practitioners (including graphic novelists, video game designers, filmmakers and sound artists).

The structure of the conference was designed to stimulate interdisciplinary exchange, especially between Philosophical Aesthetics and the Medical and Health Humanities. For this reason, we paired specialists from each discipline in the keynote sessions. Jenefer Robinson delivered the first keynote talk, which fine-tuned our understanding of empathy and was followed by a response by Julie Anderson, who offered a historical perspective on empathy in healthcare. Paul Crawford, in his keynote talk, introduced several cases studies which demonstrated the impact of the arts on the advancement of health. In her response, Eileen John explored the contributions that Philosophical Aesthetics can make to these kinds of projects. Sheila Lintott delivered a keynote talk which debunked the myth of ‘the mad stand-up comic’, followed by a rich response by Stella Bolaki, which elaborated on (among other things) Hannah Gadsby’s seminal Nanette. The final keynote was delivered by Rita Charon, who guided delegates through an exercise of her seminal work in Narrative Medicine applied to visual art. In his response, Matthew Kieran stressed the intellectual virtue of explication, as a contribution that philosophers can make to research in the medical and health humanities.

The event also included structured moments to facilitate informal conversations outside the setting of the conference building, including two performance at The Gulbenkian Theatre (on the Kent campus). On Friday, Playing ON delivered a paired-down, but deeply moving, version of their play, Can I Help You?, which examined the role race and gender have to play in mental health and suicide. The performance was followed by a workshop which provided an insight into the artistic processes informing the creation of the play. On Saturday, four great stand-up comedians (Matt Hoss, Dave Chawner, Chelsea Birkby and Juliette Burton) explored health and wellbeing on stage. The Gulbenkian was also the setting for the shared meals (lunch and dinner), which some delegates noted was very effective to get to know each other in a more relaxed setting.

The event concluded with a roundtable discussion which highlighted some important contributions of the conference. Delegates agreed that mixing speakers from different disciplines in keynote and panel sessions helped to stimulate new perspectives, especially perspectives unavailable in mono-disciplinary events. It will be interesting to see if there will be more cross-pollination between Philosophical Aesthetics and the Medical and Health Humanities in future publications. The event also included so-called ‘reverse papers’, where speakers get 5-10 minutes to pitch a research problem, followed by 10-15 minutes of suggestions from the audience. There was a sense that discussion generated at these sessions had been particularly rich.

Finally, we were particularly pleased with the enthusiastic response of delegates outside the discipline of Philosophical Aesthetics. One of our keynotes, Professor Rita Charon (General Internist and Professor of Medicine at Columbia University Medical Centre) commented, “It really, really was a spectacular meeting, a unique one, that gathered together persons who’d otherwise have never found one another.” There was a sense among delegates that it would be worthwhile to repeat a similar version of the event, perhaps in the United States. The organizers certainly hope that this event was only the start of conversation and collaborations between Philosophical Aesthetics and the Medical and Health Humanities.